The Auro has eight Caterpillar diesel engines about, with only one to supply forward momentum. The main engine is a CAT 3612, twelve-cylinder engine producing 4200 horsepower- enough to propel us at a screaming 13 knots (20 mph).

The Auro’s main (and only) engine (massive Caterpillar diesel) 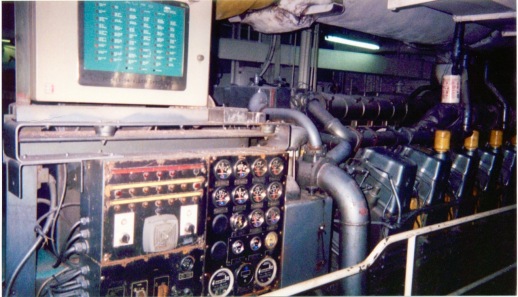 The Auro’s main (and only) engine (massive Caterpillar diesel)

Another engine is for the bow thruster. The engine turns a hydraulic pump of sorts which supplies hydraulic pressure to propel a single propeller in the bow designed to maneuver the ship’s bow left and right for close quarter maneuvering. (Sure seems like a lot of mechanism for such a simple operation, but what do I know?)

Three CATs turn generators that supply power to the vessel. Another one turns another hydraulic pump to power all the ship’s hydraulic systems. There is a second smaller CAT that is used as a backup system for the ship’s hydraulics. This engine is used in conjunction with two electric motors that together can supply enough hydraulic power to survive. The last CAT is not really part of the Auro, but rather is used aboard the skiff as the main power plant for this workhorse.

The skiff is a workboat that resembles a rectangular box with its top cut off. Measuring maybe 30 feet by 12 feet, it is used as an anchor for the one end of the net when it is being set. After the net has been made into a complete circle, this very utilitarian looking tub is then resigned to the duties of a tug as it is attached, via heavy rope, to the stern of the Auro. In this position, it simply tugs the rear of the ship as it, in conjunction with the bow thruster, keeps the Auro in a good relationship to the net as the net is being hauled in.

The CATs are fueled via a large system of tanks. The fuel tanks reside in the bow, in the side of the ship’s keel, and in four of the 22 fish wells. Yes, that’s right, four of the fish wells were filled with diesel fuel when we left port, so that our range was extended. When these four wells are empty of diesel, they are rinsed out with seawater and then filled with fish. Hmmm, I thought that last can of tuna tasted kinda funny…

As there are always at least two generators running all the time, the Auro has a constant loud humming noise emanating throughout. When we are under way, you get to add the engine’s “boom-boom” to the symphony of sound. I thought I would get used to it, and in a way I have, but to constantly hear the noise can become a bit trying at times. Yes, earplugs are mandatory equipment if you want to get any sleep (or so they were for me).

We haven’t caught any fish for several days now. Apparently the fish react to the moon, with a full moon being good fishing. Now the moon is descending, so the fishing is not so great, or so goes the theory.

My forearm is sore, so writing is become laborious.

Yesterday evening, Ele, one of the two Samoans, set up his punching bag and speed bag at the front of the wet deck. I pounded away for a while, and also worked the biceps with a 25-pound weight he had. Started doing my ab workout program, also. Needless to say, I am in pain- though a pain of a pleasant sort.

Maybe this will be a jumpstart I need to get myself into shape. I don’t have much else to do right now.