88.5 degrees Fahrenheit is how warm the Pacific Ocean was when myself and about six other crewmembers were diving off the boat. We actually had fish in our net, and they were headed towards the boat and the open portion of the net, so we became human fish scaring devices. It worked, and after ten days and ten sets resulting in skunks, we finally caught 30 ton of skipjack.

I haven’t written for quite a few days because little was going on. What little that was happening, was very frustrating and nothing that I wished to commit to paper at the time. Nothing more frustrating then needing only about 300 ton more fish, being in a good area for school fishing, and not catching anything when we made a set. Now that things have improved, so has my attitude, so I will fill you in on the goings on for the last week and a half of my life.

Boats have constantly surrounded us since we left US waters. It feel like we are at a United Nations conference, with boats from the US, Taiwan, Korea, Japan, etc. filling the waters around us, all vying for the same fish, which makes things pretty interesting at times.

Boats will be standing by when we make a set, to go after the school if we skunk. Today we were in a race with two other boats for the same school of tuna. All three boats were coming from three different points on the compass. The two boats closest in, us and another US boat (non-company) Western Pacific, were neck and neck with us just ahead and on the outside. The third, a Japanese boat, broke off early in the race. The Western Pacific, being slightly faster, was creeping inside, but finally had to break off or else run over the fish. We set and skunked – the story of our last ten days. Things got real interesting there for a few minutes.

The foreign boats tend to be a bit rude, to say the least. They take every opportunity to cut in on your action. We even had a Korean boat slice right through the middle of a school that we were working.

Sometime in the last ten days, we were able to get more avgas out of the tank for the helicopter – enough for ten hours of flight – not that it helped any. We once again ran out of fuel before any more fish had been put into our wells.

With the helicopter having only about 1 1/2 hours of fuel in the tank, Jean and I installed the ADC external oil filter that was on board. Turns out it was a good thing we waited until the helicopter was not flying anymore, as it would have been very difficult to work on the system as we were flying. The installation required the helicopter to be apart for a few days as we took our sweet time with the install. Time is something we are not short of out here. 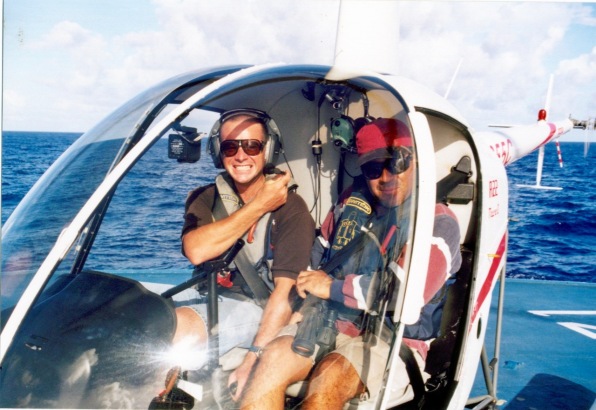 Jean “JC” (pilot) and Oscar (mastman, but also was the helicopter’s fish spotter)

Kinda boring flying circles around the boat looking for fish inside the net and only seeing jumpers outside by the skiff. It was nice to get off the boat for a while, though, and I sure got a decent view of the surrounding area from 800 feet (not that there was much to see…).

An autorotation to the water, and we were back on board.