Woke up this morning before a very spectacular sunrise. Another spectacular sunset tonight. It can be very beautiful out here. As I sit and gaze out to sea, I look at the cloud formations and they look just like someone painted them there- and they gave up when it came time to draw the landscape. Woke up before everyone else so the chopper would be ready for a post-sunrise departure.

We made three sets today. The first one was 50 tons. We missed the skipjack on the second, and only got 10 tons of tuna. The third is still in process. Today was very long and I am having difficulty recalling what occurred today, rather than a previous day.

As you can tell by our position, we crossed the equator today. I must not have been looking when we crossed the big blue line that markers the equator. I guess there is one, as there sure is one on the globe at home.

There are all sorts of traditions that are supposed to occur the first time you cross the equator by boat- more on this later.

The helicopter is shaping up nicely. Finished cleaning the floats, so now you can they are white. Cleaned the rotor blades too- Jean swears he goes faster with clean blades. First oil change today- how exciting! 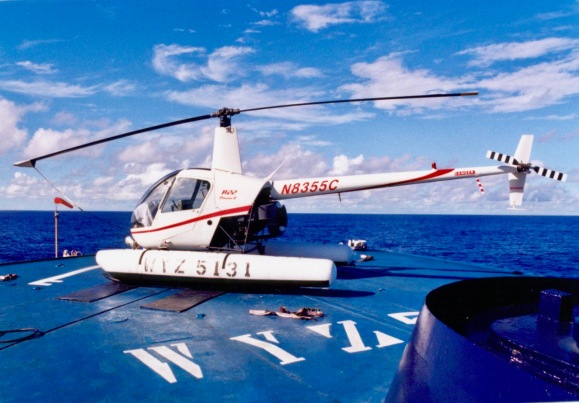 During our first set I got up the courage to climb up to the crow’s nest to get a bird’s eye view of the action. I would estimate the height to be at least 50 feet, all of which are obtained by climbing a ladder constructed of boards suspended by three vertical cables. Not the most stable apparatus- kinda sways with the boat, aided by your movement.

I overcame my fear of heights by only looking up as I climbed. The movements of the ship are amplified way up there, and at times I thought the combination of the height and movements were going to make me sick. 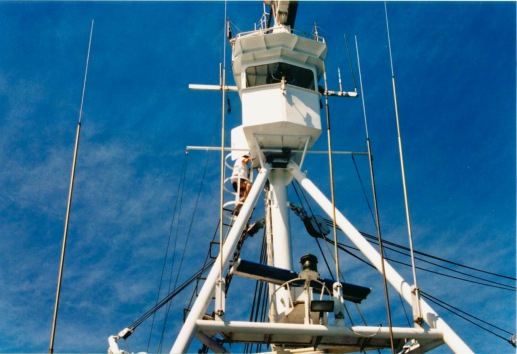 The shaky ladder that leads to the crow’s nest

I had a terrific view and even managed to get some cool pictures. I need to make a habit of climbing the crow’s nest every day so that I can work on conquering my fear of heights.

Saw some flying fish early this morning; I think they were flying fish. They looked like fish and certainly were flying… Actually they would buzz along through the air, bouncing off the water every now and again until finally diving down to not resurface.

Also saw a whale that was hanging out with the second school of tuna we went after. He was still in the net after it was closed up, so we sent the speedboat to persuade Willy to free himself through the net.

Getting back to the equator thing. Seems that the tradition has it, that the first voyage that you take, you shave your head. When you cross the equator, you do the same.

Not one to break tradition, Jean and I did away with our hair this past weekend (this is not his first trip, but his second- the French are a little slow, I guess). My hair was pretty short to start with, so losing the last 3/8” didn’t hurt too much. Figured I wanted to get it out of the way early so that by the time we get back to Samoa, I might have some hair.

My freshly shaved head after crossing the equator

I don’t care if I look stupid (as I do); I don’t plan on entering any beauty contests in the middle of the Pacific.